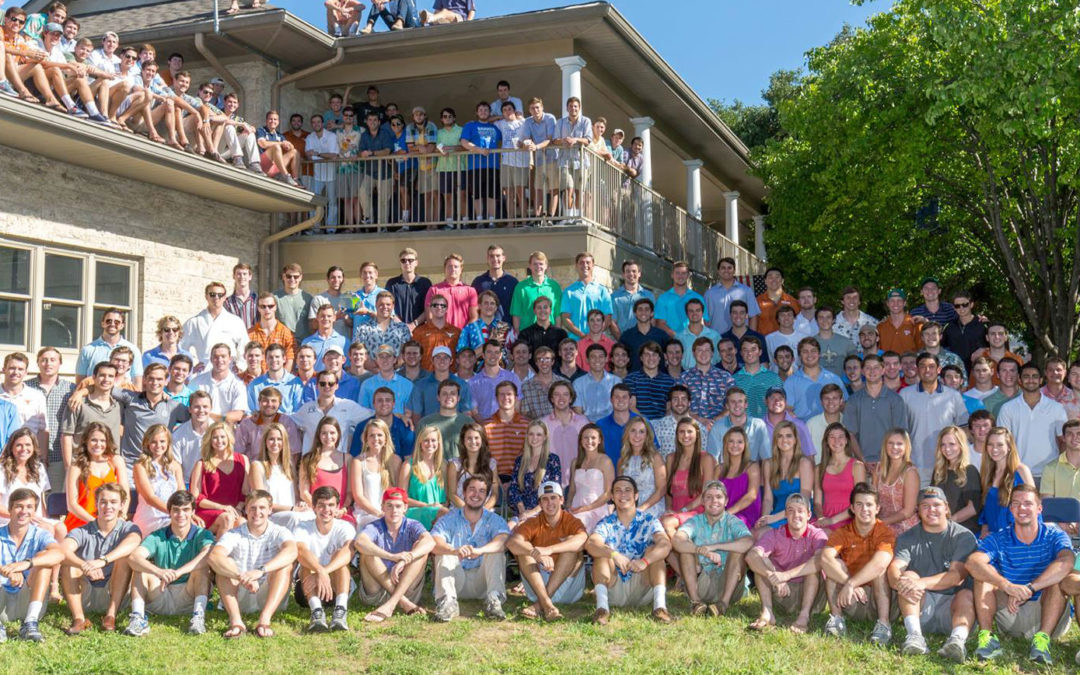 As we begin a new year and another semester, let’s take a look back at what we did in 2014. Read outgoing Historian Tim Davis’s recap of the calendar year below…

2014 was a milestone year for Alpha Nu. It marked the first year since our reinstallation in 2009 that the chapter began and ended the year with 200 members; 2014 marked the graduation of Eta and Theta, the last pledge classes before the 50-man pledge classes Iota, Lambda, Nu, and Xi, the last of which was initiated in November, adding 49 new members to the chapter.

Pro Consul Parker Montieth oversaw a complete revision of the chapter bylaws, updating outdated information to reflect the operations of our large chapter.

Under the leadership of Consul Matt Johnson, the chapter continued its commitment to philanthropy. Led by event chairman Matt Andrews, the chapter raised over $40,000 during Derby Days in April, while Fight Night Chairman Derrick Porter oversaw the 35th Annual Fight Night, which brought in an unprecedented $100,000 for philanthropy. In addition, 42 units of blood were donated from an Alpha Nu sponsored blood drive the same week.

The chapter also continued its involvement with the Boys and Girls Club of Austin at Wooldridge Elementary School, hosting the semi-annual Field Day event at the chapter house for the first time, in conjunction with Tridelt, this spring. Alpha Nu also received recognition from one of our philanthropic partners, Huntsman Cancer Institute (HCI), for being one of the Sigma Chi chapters to donate over $20,000 to Huntsman for the 2013-2014 school year (Alpha Nu donated close to $50,000 to HCI). Annotator Landon Mosley represented the chapter in being honored at the Institute’s campus in Salt Lake City in a ceremony held in June.

The chapter house improved in several ways. First, House Manager Jonah Wolf brought in a complete entertainment system for the living room. A pool table and, later, a ping pong table (then, two) were also added. Over the summer, the basketball court was renovated and expanded to a full court, and we dedicated it to Arlen Driscoll, Alpha Nu 1968, and James Thompson, Alpha Nu 1970. The chapter room also received welcome changes. Spencer Young led the renovation project that included installing hardwood flooring, repainting, and installing new lighting.

2014 saw some big changes within the University of Texas, including the announcement from President Bill Powers that he would spend one final year as head of the university system before resigning in June 2015. In sports, Charlie Strong replaced Mack Brown as head football coach, going 6-6 in his first regular season.

In alumni relations, the Audrey Freeman Golf Tournament was held in June. And Fight Night was revamped as an alumni event, with more than 100 alumni brothers returning to the house for the event in November.

The Scholarship Chairman became a position on the executive committee, with Conner Patrick serving in the restructured office’s inaugural term.

In all, 2014 was characterized by the need for Alpha Nu to adjust to its new identity as a 200-man chapter and the success with its newfound size. The chapter received another Blue Peterson and was named the Interfraternity Council’s Chapter of the Semester in the spring – just two of many deserved accomplishments in a landmark year for Alpha Nu.